Tim’s recent Melbourne Magic Festival ‘Full House – or How To Get Banned From Every Casino On The Planet’ got a fantastic review from Tim Byrne in The Age last week.

“In Full House, Tim Ellis ingeniously blends history and lecture to contextualise the game of poker while demonstrating his nifty sleight of hand. We get vivid portraits of famous card sharps like Wild Bill Hickok and Poker Alice, as well as delicious references to card game terminology: Dead Man’s Hand, Fishhooks, rivers and flops. It’s clever confirmation of the poetry inherent in poker, its dangers and temptations.”

The show was a great success with sold out crowds and lots gasps of genuine astonishment throughout. It’s a truly unique show combining storytelling, magic, theatre and even a poker game where Tim plays against four members of the audience and thoroughly beats each and every one!

“Is It Luck, Bluff Or You Were Just Dealt A Good Hand?

Remember this name – Tim Ellis -don’t ever play him in a poker game!From the beginning it was clear that this was not just any old magic show. Tim randomly selected four members of the audience to join him at the poker table and to participate in his magic game show.

This show was in a boutique theatre as part of the Magic Festival held at the Northcote Townhall. To enable all of the audience to get a close up view of the cards, they were shown on a large TV screen.

Magic always makes me suspicious and so I was alert to find any tricks of distraction or illusion. My friend even looked under the poker table for God only knows what – but she found nothing.
Somehow the suspense was building when the door was shut. Given that every deck has several thousand possible combinations I am in awe of how he won every hand.

The show begins with some storytelling of which I really enjoyed. I noticed that the audience was absolutely silent and that this fascination continued for the whole show. Those around me were clearly also enjoying the tales that were told about famous card sharps. Of course a magician never tells his secrets but he did reveal that psychology, love and luck all play a part in the lives of successful poker players.

I learned about bottom dealing… it’s not what you think and there were spontaneous applause during the show. An audience member sitting next to me said out loud (three times at the end of the trick) ‘That’s just crazy’.

Tim Ellis managed to create a comical magic show that kept his audience curious and delighted throughout. It’s a short 45 minute show that will command your complete attention the whole way through.

The final comment of my new companion was that he liked the quirkiness and found it to be generally amazing.

The final question is: do the odds stacked up in favor of seeing this unique magic show? … and the answer is they sure do. This is exceptional value for just $28 per adult.

So are you a player? Do you like to beat the odds? Are you all in when the chips are down? Then be sure to catch to Ellis’s show full house… It’ll explain why he would be banned from every casino on the planet.”

On Monday Tim performed (virtually) as guest artist at the Pacific Coast Association of Magicians Convention. The longest continuously running magic convention in the world. This was the thir 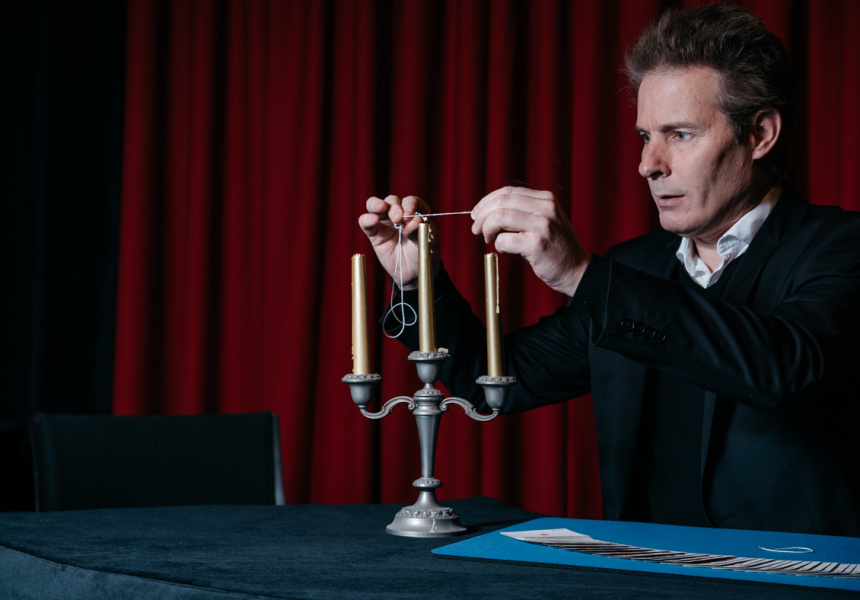 Broadsheet’s Patrick Boyle visited The Laneway Theatre for a chat and to catch the show. He writes about his unique experience HERE